A nation in trouble

Not to be construed as medical advice

The more I talk to people, the more I see that the people of our nation are in serious health trouble and are losing ground. It is like a cancer spreading through our land. People are sick and dying and don’t understand why. This is due in part to our government health agencies which are failing to protect the health of the American people and are giving harmful advice. We rely on our health and medical “experts” to give us good advice to stay healthy, and the experts rely on our government agencies for information, guidelines, and policies to set the standards for healthcare. Our health is too important for us to stay in the dark about this matter.

The Center for Disease Control and Prevention (CDC) is part of our government’s Department of Health and Human Services. They state: “We are committed to programs that reduce the health and economic consequences of the leading causes of death and disability, thereby ensuring a long, productive, healthy life for all people” (2012 http://www.cdc.gov/about/). One of the CDC programs we are all familiar with is vaccinations. When taking a child to the pediatrician, a parent is advised to continue following the CDC’s recommendations for vaccinating children, which, whether the parent realized it or not, began with the HepB vaccine given to their newborn before leaving the hospital. This is just the beginning of a long schedule of vaccines a child will receive if the parent chooses to follow their advice.

For example, take a look at measles vaccines. The CDC recommends MMR (measles, mumps, and rubella) vaccinations to be given around 12-15 months of age and again at 4-6 years. CDC records show that there were 118 cases of measles reported from January through May of 2011 – the “highest reported number for the same period since 1996” – and none of these cases resulted in death (CDC, 2011). However, a simple search on a government website called VAERS  (Vaccine Adverse Event Reporting System) using the same time period, found a total of 436 adverse events and 2 deaths related to measles vaccines (http://wonder.cdc.gov/vaers.html). These numbers are much lower than what is actually occurring since the National Vaccine Information Center says that “…perhaps less than one percent of all vaccine-related health problems are ever reported…” (2012). Some would argue that the vaccines are necessary because they have eradicated or at least greatly reduced the number of occurrences of diseases. And yet, the graph in Figure 1 clearly shows that the United States mortality rates from measles fell long before the measles vaccine was ever introduced in 1963.
Figure 1. Source: Health Sentinel 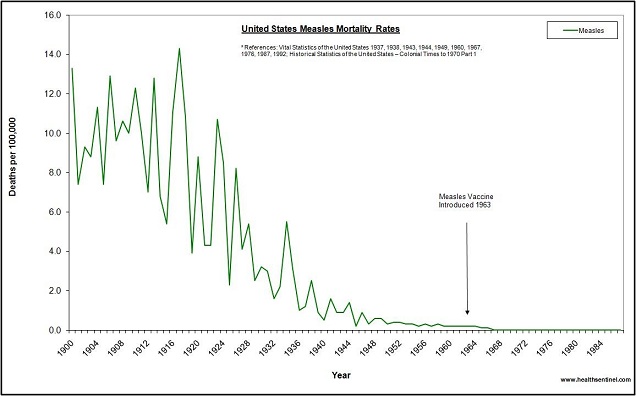 A further look into history reveals that this was not only the case with measles, but also with other diseases during this time. The question that must be answered is: What caused mortality rates to decline during this time in history, if not the vaccines?

Today, even though the United States “prides” itself as having the most rigorous infant vaccination schedule for the purpose of preventing death and disease, according to the CIA there are 47 countries with lower infant death rankings including Singapore, Cuba, Hungary, and Croatia (2012). This does not speak well for our government programs which are committed to ensure healthy life for all people.

A second government health-related entity to consider is the Food and Drug Administration (FDA). The FDA is responsible for protecting public health which includes the oversight of drug safety. They fail in this effort when they allow drugs on the market that cause more harmful side effects than the original condition the drugs are meant to treat. One of our country’s most widely prescribed drugs, according to the Wall Street Journal, are statin drugs (Burton, Winslow, 2012). They have the purported effect of lowering cholesterol to prevent heart disease; but in reality, as a Senior Research Scientist at Massachusetts Institute of Technology states, “…statins do more harm than good.” She goes on to explain, “The heart, as a muscle, is not exempt from statin toxicity. This is why the incidence of heart failure has steadily risen in step with the widespread adoption of statin therapy, now displacing cardiovascular disease as the number one killer”(Seneff, 2011). It is also interesting to find that “Half of all heart attacks and strokes in the United States each year occur among people with essentially normal cholesterol levels” (Ridker, Spiker 2012). In an article on WebMD, we read that the “side-effects” of statin drugs range from headaches, muscle aches, nausea, vomiting, and abdominal cramping to muscle injury and rhabdomyolysis which can cause kidney failure or death. They claim that “fortunately” rhabdomyolysis is “extremely rare” because it only occurs in less than one in 10,000 cases; but they later state that statin drugs have about 17 million users since they arrived on the United States market in the 1980s (2012). Is it somehow acceptable that close to 1,700 people have had kidney failure or died because of this drug, and the FDA is still allowing it to be prescribed? Since the FDA allows doctors to continue prescribing statin drugs, the problem is exacerbated by having to prescribe more drugs to treat the numerous side effects these statin drugs are causing.

Even more frightening and deadly is the FDA’s approval of chemotherapy.  Each year, more than 1 million cancer patients receive outpatient chemotherapy, radiation, or both (Halpern, Yabroff, 2008). On our government’s US National Library of Medicine website – commonly referred to as PubMed –  is the report of a study which estimates that the overall contribution of chemotherapy to 5-year survival in adults in the United States, was a meager 2.1%.  In their conclusion they state, “To justify the continued funding and availability of drugs used in cytotoxic chemotherapy, a rigorous evaluation of the cost-effectiveness and impact on quality of life is urgently required” (Morgan, Ward, Barton, 2004). Noting that this study was published in 2004, why is the FDA still allowing the use of chemotherapy? It is not working and the numerous side effects are reportedly horrendous and even deadly. There are 201 side effects listed on the Chemocare website alone. The American Chinese Medicine Association says that “most cancer patients die of chemotherapy” and it is misleading to promote chemotherapy for cancer treatment because it permanently damages important parts of our body and immune system and “has become a leading cause of treatment-caused diseases such as heart disease, liver disease, intestinal diseases, diseases of the immune system, infections, brain diseases, pain disorders and rapid aging” (Moritz, 2011). The FDA is continuing to allow deadly and failing cancer treatments while there are many alternative treatments, such as Dr. William D. Kelley’s proteolytic enzyme therapy which brings a 90% cure of cancer (1998). Now compare 90% cure rate to the 2.1% “survival” rate of chemotherapy and you have to wonder what the FDA is thinking. It is not surprising then, that R. Webster Kehr of the Independent Cancer Research Foundation, advises that we not believe that the federal government is looking for new cancer cures. He goes on to claim: “The medical establishment could have a 90% cure rate for cancer tomorrow if they really wanted to cure cancer…” (Kehr, 2011). With this knowledge it becomes difficult to continue to trust the FDA.

It is not acceptable that the information, guidelines and policies our government health agencies provide and promote, can be found to be misleading and dangerous. We cannot rely on them to provide the information we and our doctors need in order to make informed decisions for our own health and the health of our loved ones. It makes me wonder what happened to the Hippocratic Dictum – “First do no harm”. If it applies to our medical professionals, the same standard should apply to the medical policymakers. Because we cannot trust our government health agencies to be truthful in these few issues mentioned, we have to question whether or not the other information we receive from them can be relied upon. There are very few things that make me angrier than to find out I have believed a lie, and in so doing have made decisions that harmed the ones I love.

Thesis: Government Health Agencies are failing to protect the health of the American people and are giving harmful advice.

Authored by Susan Stellpflug, Life and Crisis Coach
Copyright 2012 Susan Stellpflug© Permission is hereby granted to copy and distribute this article but only in its entirety