Fungus overgrowing the human body brings with it many different symptoms. Pathogenic fungus can get its start early on in the life of the victim and can manifest in a plethora of forms. Usually the “mother fungus” lives and feeds in the intestines and sends out its “roots” to other places in the body much like a houseplant sends its roots through a pot of soil.

A simple toenail fungus for instance, has a source from within the intestines. When you only treat the external manifestation of the fungus you drive it out of those tissues and into other tissues. Where next? The elbow skin? The joints? The heart? The brain? It is critical to fight any manifestation of fungus from the inside out to prevent damage to other tissues.

Upon waking up and before drinking or putting anything in your mouth, gather a bunch of saliva and spit it into a clear glass of water–just saliva and not phlegm. Wait for 15 minutes and observe if the saliva becomes “stringy” with tiny strings like spider legs floating downward or if part of it becomes cloudy and sinks to the bottom of the glass. If so, you can suspect fungus or Candida in your gut and body. Once you suspect fungus of any kind you can have lab analysis of saliva and/or blood done to confirm the findings. Or, just take the treatment we’ll lay out for you! 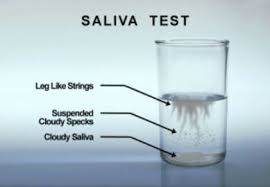 If you have or suspect you have fungus, begin treatment by cutting off the fuel supply to the fungus. Sugars are the biggest food source for fungus to grow in your body and carbs in general run a close second place. Go completely sugar-free, gluten-free and even all grain free to stop feeding the fungus inside your body. Eat lots of naturally fermented foods, which are full of friendly bacteria, like sauerkraut, kimchi and kombucha.

Natural things that fight fungus in the body are:

Probiotics and prebiotics for treating fungus

Probiotic supplements are a must as they support fungus-fighting friendly bacteria in the gut. Rotate through probiotic brands to keep the bad bacteria and fungus guessing at their defenses. For instance; take a bottle of Multidophilus until gone and then switch to PB8 Acidophilus, then switch to Nature’s Sunshine, then Primadophilus and so on. Prebiotics are found in millet, chicory root, Jerusalem artichoke, leeks, asparagus, saurkraut, keifer, bananas and many other things. Including probiotics and prebiotics in the diet brings enhanced immunity, reduced allergies and asthma and also less gut inflammation.

Once a fungus starts to die-off, the fungal spores burst open and release all of their toxin into the body at once. The resulting flu-like symptoms and occasional rash flare-up are called “Herxheimer Reactions”. If this happens, DON’T STOP! This is an indicator that the fungus has been hit hard and if you stop now it will regroup and even mutate to defend against what was just thrown at it. Activated Charcoal capsules will help absorb the extra die-off toxins to relieve headaches, nausea and other die-off symptoms. Ginger root tea is also very helpful for fighting the effects of fungal die-off.

Causes of fungus in the body

* Based on 150lb adult. For infant or child dosages I recommend finding an experienced naturopath or nutritionist that knows your child.